Special announcement.. Nikstock had to change venue and dates. 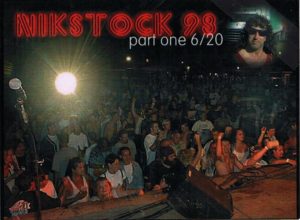 NIKSTOCK’s 32nd anniversary is official for 2017 and GOING TO BE THE BIGGEST ONE EVER in two Parts!!! Therefore, both events are being held in Laurens ny at Edgewood​ mountain 216 crow hill Rd laurens ny 13796 . The first event is on June 23rd (Fri.),and june 24th (Saturday); and the second event is August 18th (Friday) and August 19th (Saturday).
Both events include over night camping with a total , 40 bands (june) and (August) which, includes Insomnia, there will be 2 stages, 100 kegs, a bikini contest for all you male fans out there, food, and a cash bar and celebrity host and mc IVONNA CADAVER from the television series macabre theater
Ticket prices are $25.00 in advance, $35.00 at the gate, and $25 for Saturdays only. Please note if you are a band, sponsor, or vender it is time to submit ones booking slot to this anniversary event in 2017!!!
SO HOPE TO SEE EVERYONE IN 2017, and thanks to everyone for there continued support throughout these last 32 years, nikstock 2017 has a special host m c ing the show IVONNA CADAVER from the television series macabre theater..for more info www.nikstock.com
Tickets available at:
Edgewood Mountain
Sound go round in vestal
Music city in vestal
www.NikStock.com
ESP guitars HAVE BECOME PROUD sponsor’s of Nikstock!! 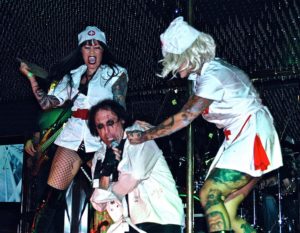 Nightmare at The Dragonfly

eatured Breaking The Law who rocked the house, bringing British Steel back to Hollywood!  Pumping the crowd with Priest Classics  such as “Painkiller”, “Some Heads are gonna Role”, “Free Wheel Burning”, “Living After Midnight” and many more.

Be sure to check out the bands website for future dates.

3/15/16 – OK Folks! Starting to ramp up for the season. Tickets are in from the printers and Promo-Packs will be going out sometime next week. Website updates will be more frequent as the event approaches closer. BANDS: Start sending your logos in and thanks to those who did already. STREET TEAMS should start to make a lists of dates and events for flyer hotspots. Remember… It’s always 10% Play and 90% PROMOTION!